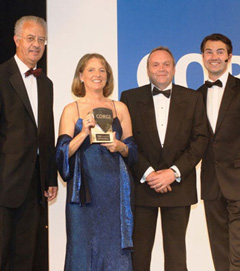 By Stephanie Trotter, president of the Society. CO-Gas Safety is an independent registered charity with cross party support at the House of Commons and European Parliament. The charity was founded by Molly Maher and Nigel Griffiths, MP and the late David Jenkins of RoSPA. CO-Gas Safety was launched at the House of Commons of the 25th January 1995 to work to try to reduce accidents from Carbon Monoxide (CO) poisoning and other gas dangers. We lobby for changes, which will help to achieve this. We also help and advise victims whenever we can.

Stephanie Trotter, works as a full time volunteer and has done since the charity’s launch aided by other voluntary directors.

Stephanie Trotter became involved through meeting Molly Maher, who had lost her son, Gary, through CO poisoning in Tenerife. Molly’s daughter, Sheree was confined to a wheelchair, as a result of the same incident. Molly had set up a charity called Consumer Safety International (lobbying for safer holidays).

Stephanie had been campaigning for children’s activity holiday centres to be licensed, (her son, Alex was injured at one and had to have an operation for a clot on the brain. Luckily he recovered completely and has a 2:1 degree from Southampton University (Philosophy) and is now grown up). Stephanie’s husband is John Trotter was a senior partner (now retired and a consultant) at Bates Wells & Braithwaite, a leading firm of charity lawyers. Stephanie is a barrister, who has practised and has also lectured at the Inns of Court School of Law for nine years, (postgraduate course – final year of the Bar Exams). She knew nothing about CO poisoning when she started. Hardly anyone would talk to the charity so she learned from the victims and their families. The same stories recurred again and again.

Quite quickly, Stephanie had compiled a list of aims and objectives that were prepared in February 1995 for our constitution. It is depressing to read these now and find that so few are fulfilled and so many are still extremely urgent.

However, there is now a European Standard for CO alarms, (EN50291) and more or less, registration for individual gas operatives except it is the firm that is registered and the operatives are merely listed. This is causing problems.

The charity also collected its own data of CO deaths and incidents from the first of September 1995 and has published this data from 1996.

In January 2011 the charity published 15 years of data which was produced for the first time in pie and bar charts and using a map. The charity publishes its data every year in its press pack and on this website.

However, the charity has no secure guaranteed funding to continue collecting, collating and publishing this data, although it has applied for such funding many times, funding has always been refused.

The charity’s data collects all unintentional CO deaths and injuries and publishes the names of the dead with the date of death so that anyone can check our data. We have a good relationship with Coroners and try to check deaths with them. The charity tries to check with Coroners and has had its data validated by a statistician, Dr. Craggs in 2011-12 and twice since most recently in 2016.

There are still objectives that are unfulfilled, for example prime time TV warnings about CO. Since CO cannot be sensed using human senses and most people don’t know what it is or how to avoid it, it seems blindingly obvious that there should be these warnings about CO rather than things we do know about such as smoking or drinking and driving.

A levy on the gas suppliers was recommended in 2000 by the Health and Safety Commission to pay for raising awareness and for research.

In 2000 the HSC also recommended that the gas emergency service carry and use equipment to test gas appliances for CO.

These sensible suggestions were recommended after an exhaustive gas safety review and with the support of the majority of the stakeholders. Yet neither Government nor industry has implemented these excellent recommendations. Why not? If a levy does not appeal why not use taxpayer’s money to pay for such warnings as it would save the country money as well as lives?

The Cabinet Office has a duty to put out warning films but despite a letter sent by Holiday Travel Watch in 2012, followed up by a personal visit by Stephanie Trotter and Frank Brehany and the promise of a response, none has been forthcoming.

We are also lobbying for a change that that landlords be licensed, and/or landlords’ gas safety checks and certificates require that the appliances is serviced or at least a record of the combustion gas is measured, given to the tenant and kept. We have support for this from Pimlico Plumbers; Dominic Rodgers Trust; Katie Haines Memorial Trust; Frank Brehany, Consumer Campaigner; National Landlords’ Association; the Gas Industry Safety Group; Gas Safety Trust; All Party Parliamentary Carbon Monoxide Group (APPCOG) and Institute of Gas Engineers & Managers (IGEM). Please note that British Gas does not undertake gas safety checks without a full service agreement which we applaud.

Stephanie Trotter submitted a legal article about this including the installation of CO alarms to EN 50291 in all rented property as advocated by Eddie Hughes MP and this was published on 23rd March 2018 by the New Law Journal.

We drafted amendments for the Energy Bill (Autumn 2012) and had the unanimous support of CO+SAVi for them. CO+SAVi is a group of charities, organizations and victims.

However, CO-Gas Safety considers that these amendments were basically ignored. Two were tabled as amendments, one on smart meters by Barry Sheerman MP and one on the levy by Mike Hancock MP but neither was in the charity’s opinion, seriously put forward and neither was discussed in the House of Commons.

The charity has put forward an EU petition and also a Parliamentary petition in 2016.

Paul Overton, step father of Katie Overton who died of CO in 2003 aged 11.

We have been trying to obtain the support of a Lib Dem MP and also a Labour party MP for a long time.

We have a patron, Lord Hunt of Kings Heath.

Also in this section: