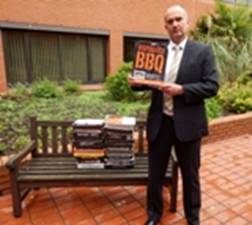 Ian Harrison is pictured with the 23 disposable barbecues purchased at outlets in Hartlepool as part of the investigation.

COUNCIL trading standards officers in Hartlepool are urging people to guard against the dangers of using disposable barbecues following an investigation into the labelling of these throwaway picnic cookers.

The latest warning follows an investigation into the labelling of throwaway barbecues being sold throughout Hartlepool which found that out of 23 disposable barbecues being sold, only eight displayed any warning about the dangers of carbon monoxide poisoning.

Only two of the test purchases displayed the warning prominently on the product’s outer label and only five 5 included a warning that exposure to carbon monoxide poisoning could result from taking the product into an enclosed space such as a tent.

Carbon monoxide can kill within just three minutes and there have been a number of tragic deaths in recent years throughout the country.

In the past two years eight men, women and children – one as young as six – have died as a result of charcoal barbecues being taken into tents, caravans, vehicles and buildings to be used for cooking, keeping warm or simply to keep camp sites tidy.

In April 2012 a six-year-old-girl died near the New Forest when a coal briquette barbecue was taken inside a tent to provide overnight warmth and the following month a 14-year-old girl died at Bucknell, South Shropshire, in similar circumstances.

Disposable barbecues give off carbon monoxide when being used and continue to do so until they are completely cold. Carbon monoxide is a colourless, odourless, tasteless, poisonous gas that, even in relatively small quantities, prevents blood from providing essential oxygen to cells, tissues, and organs.

Exposure to carbon monoxide in enclosed spaces often causes drowsiness and the victims fall asleep unaware of the poison gas that is killing them.

Ian Harrison of Hartlepool Council said: “When used as intended, in the open air, disposable charcoal barbecues are a safe, easy, cost effective method of cooking food.  After using them the residual heat from the barbecue can be seen by campers as a way of keeping warm in their tents, unaware that even when cooling down carbon monoxide is produced and contained within the canvas walls with deadly effect.

“Despite these widely publicised deadly events and the efforts of concerned organisations to raise awareness and persuade manufacturers and retailers to improve warnings the majority of disposable barbecues on sale still do not contain any information about the dangers of carbon monoxide.

“Warnings that barbecues are not to be used indoors are simply not enough as, without any mention of potential carbon monoxide poisoning, users may think the warning relates to the potential fire risk and would not assume that a cooling barbecue can still be deadly.

Lynn Griffiths, President of campaigning charity Carbon Monoxide Awareness, added: “I am very disappointed with many retailers. Only last year they pledged their support to our charity’s national Cosy But Deadly camping campaign launched in memory of 14 year-old Hannah Thomas-Jones and those who had lost their lives to carbon monoxide due to barbecues being taken into tents.

“They said that they would add point of sale warning notices next to their barbecues because it was too late to amend the warning notices on packaging due to them either being in transit from the manufacturers or already in warehouses.  Retailers said they would look at updating their warnings for this year. They don’t seem to understand how important it is to get the message across to their customers that carbon monoxide kills in less than three minutes.”

“We are very saddened that Trading Standards have found that only two of the disposable barbecues (of the 23 examined) displayed the warning prominently on the product’s outer label.  This simply isn’t good enough and although I have found good warnings on some Tesco barbecue fuels, these warnings should be on every barbecue and every pack of barbecue fuel sold.”

CO-Gas Safety has lobbied for prime time public warning films about the dangers of carbon monoxide since 1995.

Note to News Editors – Below is the story of Roland Wessling who lost his wife in a tragic carbon monoxide poisoning incident in 2011. For interviews with Roland Wessling or Ian Harrison contact Alastair Rae on the number at the bottom of the press release.

“I lost my partner Hazel Woodhams in July 2011 to carbon monoxide poisoning and almost died myself. I somehow survived but suffered severe injuries. What losing Hazel means to me, cannot be put into words, let alone into numbers. What happened to me, can.

As a direct result of the carbon monoxide poisoning, I spent 2 weeks in intensive care, a further 2 weeks in hospital after that, I had 8 operations on my right arm, resulting in a scar with 80 stitches, 70 cm or 28 inches long, 6 hours in 3 sessions in a hyperbolic chamber at a simulated 30 metre depth to get the carbon monoxide out of my system, I had 6 months of physio and hydrotherapy up to 5 times a week and, to date, just under 14,500 painkillers to deal with the aftermath of the injuries.

“All this is the result of taking a small, cold-to-the-touch charcoal barbecue grill into a large tent before going to bed. We were both highly educated people, both had MSc degrees in forensic sciences, Hazel worked as a Scene of Crime Officers for West Yorkshire Police and I teach forensic science at the UK Defence Academy at Cranfield University. We should have known that there was a risk of carbon monoxide and other harmful gases from the charcoal but we didn’t. We had a carbon monoxide detector in our house but that was not enough to save Hazel’s life.

“Carbon monoxide can threaten in many different environments, such as tents, boats or at home, and kills almost instantly. Without proper education, greater awareness and safer products, more and more people will die as the result of carbon monoxide poisoning and some of these cases will not even be attributed to carbon monoxide. I was arrested when the police arrived on site. What they saw was a couple, one dead, the other injured and I appeared to be ‘drugged’. I was de-arrested six hours later when the hospital confirmed the carbon monoxide level in my blood. And I do not blame the police officers on the scene in the slightest but the words ‘Roland Wessling, I arrest you for the murder of Hazel Woodhams’ will always be with me. The thought that anyone could contemplate that I killed the person I loved most in the world, is completely overwhelming.”